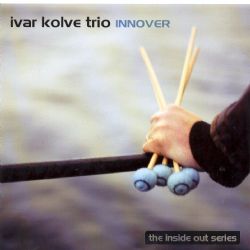 First Curling Legs album by the highly talented, young Norwegian vibes/marimba player, Ivar Kolve - who also composed six of the eight tracks. It was recorded during 3 different studio sessions between 2002 and 2004. This is an absorbing trio album with Kolve’s virtuoso playing perfectly complemented by Stein Inge Braekhus on drums & percussion and Sébastian Dubé on double bass (sometimes bowed), who also composed one of the tracks. The moods move from reflective and dreamy to complex and rhythmic with wonderful interplay and tonal balance between the well-matched timbres of the three instruments. Kindly produced with the permission of Bill Trythall.