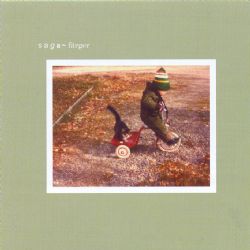 In 2001 drummer Daniel Olsson and pianist Joakim Simonsson formed jazz trio Saga. The bass chair has since been filled by different players, but in summer 2003 the duo found their perfect match in Pðr-Ola Landin, who has been in the trio since. Sagas music gets its special colour from Swedish folk music and hymns, both a strong influence on the groups main composer Joakim Simonsson. He describes the outcome as some kind of "melancholy free jazz with a touch of folk music." Free improvisation has with time also grown to be an important part of Sagas music. Often a song is no more than a simple melody, like a hymn, open to be explored and developed anew each time its played. Kindly reproduced with the permission of Found You Recordings NB Saga are now the Open Trio - see their 2008 release elsewhere "Goodbye Everytime" elsewhere on he site.